Maria and Cesar’s heart journey began before their son Noah was even born.

While alone at a routine checkup during the fifth month of her pregnancy, Noah’s mom, Maria, learned the child she was carrying had a rare and complex congenital heart condition. She was told he might not survive and if he did, caring for him would be extremely challenging. 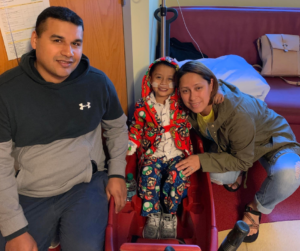 Upon receiving the heartbreaking news, Maria and Cesar connected with Dr. Shiva Sharma, a retired pediatric cardiologist at Children’s Healthcare of Atlanta Cardiology who monitored the pregnancy closely. While still in utero, Noah was diagnosed with single ventricle complex heart disease which means that instead of having two good-sized lower ventricle-pumping chambers, he would have just one. Dr. Sharma also confirmed Noah had heterotaxy syndrome, which means his abdominal organs and heart were in the wrong position. Noah’s heart and stomach were developing on the right side of his body instead of on the left. Heterotaxy syndrome is associated with immune system problems as well intestine and liver abnormalities.

Following his birth, Noah remained in the cardiac intensive care unit (CICU) for two weeks until he was able to breathe on his own with 70-80 percent oxygen levels. Noah underwent his first surgery with Dr. Kirk Kanter at just four months of age and had endured three surgeries by his first birthday. The surgeries involved unexpected setbacks and weeks’ long hospital stays. The surgeries were a stressful experience to say the least, but the staff at Children’s Healthcare of Atlanta Heart Center went above and beyond for the family every step of the way.

Maria explained, “From the moment you get there, you don’t have to ask for them to take care of your child. They already know. I don’t know how they find these perfect people, but they all work there. From the moment you walk in, they welcome you and know who you are. They understand what you are going through, let you know you are not alone, and care for your child as if he was their own. Children’s Cardiology is not a place where you are sick. It is a place where people take care of you.”

Maria also recommends connecting with other parents on the Kids at Heart Facebook group where parents who are going through similar situations share stories, ask questions, and offer encouragement. She explains, “It helped me prepare for what was to come. I knew it was going to be hard, but I don’t think you are ever really prepared for something like this. It’s amazing how connecting with other parents makes you feel less alone.” 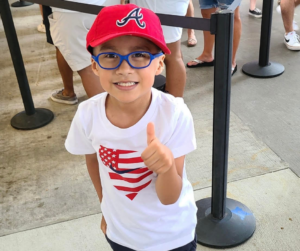 Noah is now six years old and checks in with his cardiologist, Dr. Neill Videlefsky, regularly. He loves playing video games, riding his bike, and spending time with his older sisters, Isabella and Alyssa. “I think my son was put on this earth for a reason – to open my eyes,” said his mother. “Despite everything he has been through, he wakes up every single day with a smile on his face. I am a better person because of Noah and the people he connected us to at Children’s Cardiology.”