When one-day-old Caleigh was diagnosed with an atrial septal defect, her parents had a hard time wrapping their minds around what it meant. But when they were referred to a pediatric cardiologist at Sibley Heart Center Cardiology, CHD became real in their lives.

Chiandria and Khorey became well-versed quickly and learned that their daughter would require open heart surgery to repair the hole in her heart before she was three years old. They elected to have the surgery when Caleigh was two, hoping that she would not remember much about it and giving them the opportunity to highlight what a strong girl she is.

“On the day of surgery, we last saw her around 7:00 a.m. and not again until 2:15 p.m.,” Chiandria said. “Probably the most scary, awful moment was seeing her afterward, hooked up to tubes and laying there completely incapacitated. We’d just seen her that morning, happy and vibrant, and here she was, not moving at all. It was shocking.”

Chiandria says she was overwhelmed with emotion and brought to her knees. It was hard to take in. Although the next several hours were tough, the team at Sibley coached them through it.

“They took extra care of Caleigh, and everyone kept assuring us that we were moving in the right direction,” Khorey said. “They continually referred back to us and asked if this was a normal reaction for her. They said she was a very tough baby.”

Chiandria agreed that everyone at Sibley was focused on making the best of a hard situation. 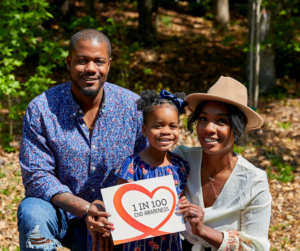 “They were constantly checking on us,” she said. “They would see me walking and anxious in the hallway and ask, ‘How are you doing, mom? Is there anything we can bring you?’ That was really kind.”

Khorey and Chiandria also appreciated the thoughtfulness of the donations and food delivery from other families who had been in similar situations. Kids at Heart, which the family is a member of, offered support and suggestions for ways they can help Caleigh and remind her of everything she’s triumphed over. After her experience with Sibley, Chiandria has now applied to be a member of the Cardiac Family Advisory Council.

Chiandria said she and Khorey both wish they could’ve known and could tell others simply that it’s going to be okay. Although it is common to think the worst when a parent hears the words “hole in the heart,” they have been amazed to see Caleigh come out on the other side and flourish.

It is a serious surgery, but you’re dealing with professionals who deal with this condition on a daily basis,” Khorey said. “They’re doing their very best to comfort your child and get them through this process unfazed. I feel like Sibley did that.”

“It was my pleasure to work with Caleigh and her family through her heart surgery and postoperative care,” said Dr. Timotheus Watson. “I emphasized to Caleighs’ parents that she would likely have a good outcome after surgery for the atrial septal defect. It’s great to see Caleigh get back to doing regular kid activities.”

Those “regular kid” activities include everything from drawing, painting, singing, dancing, and swimming. Caleigh also loves the outdoors and her parents recently purchased her a fishing pole so she can learn how to fish. Despite her condition, this young girl has shown herself to be kind, strong, and resilient.

Chiandria has created a scrapbook of Caleigh’s heart warrior journey so one day she will know all the details of what happened. They talk to her often about her scar, which she calls “my Caleigh zipper.”

They have taken away from the experience that the support and prayers of their friends and family, as well as their faith in God, were absolutely vital in helping them stay strong through the process. And they say the strength and resilience of Caleigh herself truly inspired them and gave them a new outlook on what strength is.

“I know now that my child is stronger than I could ever dream to be,” Chiandria said. “I don’t have to coddle and baby her, hover over her or try to protect her from the world. She’s my little warrior, and I’m so grateful.”