Sarah and Duncan learned early in her pregnancy that their twin boys would have a unique path in life. Wesley Blackwood, MD, pediatric cardiologist at Children’s Healthcare of Atlanta Cardiology, told them during the second trimester that one of the babies’ hearts was not forming properly. Fletcher had Hypoplastic Left Heart Syndrome (HLHS) with tricuspid atresia, and he would need surgery soon after birth.

Five days after giving birth to the twins by C-section, Sarah and Elias joined Duncan and Fletcher at Children’s Healthcare of Atlanta Heart Center for Fletcher’s first life-saving surgery.

The staff at Children’s Cardiology went out of their way to help us, allowing Sarah to continue to breastfeed and the twins to bond,” Duncan said. “They took pictures in the ICU when we couldn’t be there. They helped us file paperwork and connected us to the Ronald McDonald house. The whole crew seemed genuinely concerned about our family.”

Repair of HLHS involves three separate surgeries, and there are sometimes hiccups along the way. When Sarah returned to work at the U.S. Department of the Air Force, the couple learned that finding a daycare that would accept Fletcher and had the capacity to care for his needs was not possible. They decided Duncan would stay home with the boys and be Fletcher’s primary caretaker.

When they first brought Fletcher home, Duncan said he would cry with no sound. He had lost his voice because of the intubation, and they worried it would be permanent. 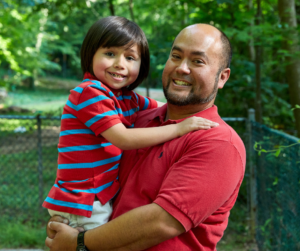 “We would talk to him all the time and try to get a response,” Duncan said. “We called him ‘tink tink’ for tinkles when he filled his diaper, and he’d light up, look around and smile. When he finally began to giggle at the name, those were the first sounds we got instead of crying.”

As they waited for Fletcher to gain weight before the third and final heart repair surgery, the family was killing time at the mall when he was briefly exposed to a sick child and subsequently came down with a nasty bug. He went into congestive heart failure, and suddenly the third repair on his heart was no longer an option. He was placed on the transplant list, and the waiting began for a new heart.

“It felt like forever,” Duncan said. “I spent 89 days in a fold-out chair in his hospital room. By that time, we’d had a third boy, so we had twins and a baby. My wife was still nursing. It was a crazy time.”

“During COVID, the whole world got to see how we live every day,” Duncan said. “We stay home during flu season, shop at off-peak times, limit visits and do a lot of mask-wearing and hand sanitizing. My advice to others with HLHS is to stay diligent, keep things clean, cut unnecessary trips and enjoy your time together.”

Fletcher is now a determined, opinionated 8-year-old who loves race cars, Legos, monster trucks and playing (and fighting!) with his brothers. He’s learning to ride a bike and is becoming interested in sports like golf and baseball. He struggles to want to eat and take his medications, but his family encourages him by reminding him that there are other kids with a “special heart” like his.

“We don’t pass up opportunities to be around other kids like Fletcher because we want him to know he’s not alone,” Duncan said. “We tell him, ‘You have to eat, you have to take care of yourself and take your meds.’ We try to be as truthful and straightforward as we can. He’s pretty driven. His newest goal is to reach 85 pounds by the end of the year.”