When Chris and Carol adopted Chloe from China in December of 2014, they knew she had a serious heart condition. Specifically, Chloe had multiple holes in her heart, a condition that is typically treated before a child is six months old. At two and a half years old, Chloe’s condition remained untreated. She weighed less than 20 pounds and was not yet walking.

Chloe’s first surgery successfully closed the holes in her heart. Following the first surgery, Chloe received her first pacemaker after her heart failed to come back to rhythm. Chloe spent several weeks in the hospital and did experience some fluid leakage after surgery, but by spring of 2015, she was walking and thriving until spring of 2019 when Carol and Chris noticed she was slowing down, getting tired, and feeling short of breath.

In August of 2019, Dr. Martha Clabby, who had taken over as Chloe’s cardiologist, found that Chloe’s valves were leaking severely and required surgery to repair. Additional information in the following months led Dr. Clabby and the team of doctors at Children’s Cardiology to recommend a heart transplant. The Garretts were devastated after hearing this news. Surprisingly, as pediatric cardiologist Dr. William T. Mahle at the Heart Transplant Clinic began monitoring Chloe, her condition started to stabilize. After another heart catheterization, Dr. Mahle and the Children’s Heart Center team decided against a transplant. Ultimately, the team agreed that surgery to repair her current heart was the way to go.

In February of 2021, cardiothoracic surgeon Subhadra Shashidharan, known to many as Dr. Subi, replaced Chloe’s pulmonary valve, repaired her tricuspid and mitral valves, and she received a new pacemaker.

The team of nurses and nurse practitioners reassured us before the surgery and checked on Chloe after her surgery. They really cared about her and our family and it meant so much to feel that personal touch. At the Children’s Heart Center, you are not a number. The whole team was interested in how things were going and how Chloe was doing.”

The Garretts don’t know Chloe’s long-term prognosis and prefer to go visit to visit. She received a positive report during her July 2021 appointment and will see Dr. Mahle again in six months. 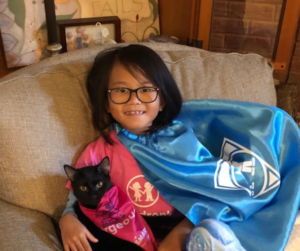 Carol offers advice for other parents caring for a child with a chronic heart condition: “Listen and get all the information you can from the doctors – and it’s ok to get other opinions. I’m thankful that Dr. Clabby reached out to colleagues to get their opinions. Your child is in the best possible hands at Children’s Cardiology. All the doctors are great, and chances are they have seen your child’s condition before. Above all else, don’t lose hope and try to take things one day at a time.”

She continues, “The journey is a marathon, not a sprint. There were many times we took one step forward and two steps back. Healing looks different for each child, and since Chloe’s initial repair was done later than most children with her condition, her outcome has been difficult for her doctors to predict.”

One thing Chloe really loves at Children’s Healthcare of Atlanta Heart Center is the therapy dogs. In 2015, after her first surgery, she visited a dog named Izzy every chance she got. Another dog, Uno, was her best buddy during her last hospital stay earlier this year. He comforted her many times and was especially helpful during an echocardiogram. Chloe said when she grew up she was going to get a golden retriever. She was thrilled and surprised when she received a sweet golden retriever puppy for her ninth birthday, two weeks ago. She named her Izzy.