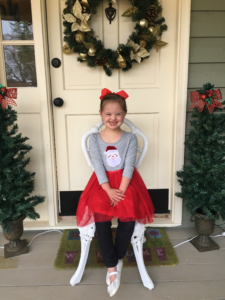 As a young couple with one child living in Charleston, SC, Christie and Billy were expecting a routine ultrasound appointment at their 20-week check-up. However, when the nurse became quiet and asked them to wait for the doctor to come in, they knew something was wrong. They soon learned that their baby had a potentially serious heart defect.

A specialist determined Emily had atrioventricular septal defect (AVSD), which features holes between the chambers of the right and left sides of the heart. In addition, the AV valve that controls the flow of blood between the chambers was not formed correctly. They learned that Emily would require surgery in her first months of life. Not only that, but this CHD was known to be common to babies born with Down syndrome or Trisomy 21. Christie had a MaterniT21 blood test to confirm.

“When we got the results, we were devastated,” Christie said. “We cried with each other, family and friends. We missed several days of work while grieving. What we didn’t know then is how absolutely amazing it is to have a child with Down syndrome. The endless laughs, hugs, affection, perseverance and determination to succeed is far more than most children and adults.”

Christie and Billy took immediate action to alter their lives and careers so they could be closer to their families and Children’s Healthcare of Atlanta, where Christie’s mom had many contacts. They instinctively knew how much they would need the support of both to ensure that Emily would thrive.

Emily was just 4 months old and slightly over 9 pounds with a heart the size of a strawberry when she had her AVSD repaired at Children’s Healthcare of Atlanta Heart Center. Her surgery went as expected, and the repair was complete. After a week at Egleston, Emily’s parents took her home. Now 8 years old and under the care of pediatric cardiologist Usama Kanaan, MD, she was recently discharged from Sibley Heart Center Cardiology for the next 5 years.

Christie said she encourages families to ask their surgeons and care team to draw pictures of complicated procedures.

“As a visual learner, there’s nothing like a diagrammed, color-coded picture for a parent to refer to before and after surgery,” Christie said. “We had pictures of a pediatric heart, simply drawn and labeled, that stayed on the refrigerator for our reference. Even to this day, we still find ourselves Googling images and explanations of Emily’s heart defect. While it may be uncomfortable to ask the same questions repeatedly, those without medical expertise need constant repetition and reassurance of their child’s procedure.”

Just as her family hoped when they made the life changes they did after learning about her CHD, Emily is a thriving, happy little girl. She is a swimmer and recently joined the Special Olympics of Georgia swim team through Swim Angelfish Adaptive Aquatics. She also has enjoyed dancing with other special needs children at Southern Performing Arts Academy. Outside of sports, Emily likes to garden, play outside with neighborhood friends, hike and go to the beach. Christie said Emily is an excellent reader and loves to read to her sisters before bed. Because her parents made that early decision to return to Atlanta before Emily was born, she gets the benefit of spending lots of time with her grandparents, uncles and cousins.

“In our neighborhood, she is surrounded by friends who treat her like family,” Christie said. “We also rely on the support of our special needs community. We use support groups like the Down Syndrome Association of Atlanta for guidance on all things Down syndrome related. The support of other special needs families has been critical to us.”

Other resources the family has utilized include Babies Can’t Wait, an early intervention program for children with disabilities, the Bobby Dodd Institute, which helps support families with services like extra-curricular activities, therapies and medical supplies, and the Katie Beckett waiver, a financial lifesaver for families with medically complex children.

“As a parent of a special needs child, navigating the world of doctors and therapies can be overwhelming,” Christie said. “I encourage families to reach out and connect with other parents with similar journeys. It is so important to support one another and lean on your care team for support. Emily is a thriving child who loves life, and we wouldn’t be where we are today without the support of the team at Sibley, family and friends.”