When her 7-month-old seemed to have a progressively worsening cold the week of Thanksgiving, Shekeenah thought it best to get him checked out before the pediatrician’s offices closed for the holiday. She got the last appointment of the day and took Jonah for what she expected to be a routine visit. It was anything but routine. 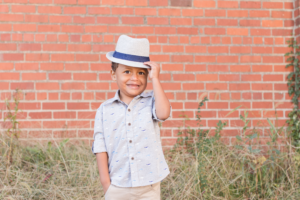 His respiratory rate extremely high, Jonah was taken by ambulance to Scottish Rite and Shekeenah and Ray soon learned that he had a cardiac fibroma, or heart tumor. It was a tumor so rare that they were told most cardiologists never see one in their career.

Now 5 years old, Jonah is cared for by Chad Mao, MD, and the Advanced Cardiac Therapies team at the Children’s Healthcare of Atlanta Heart Center. Shekeenah says that Dr. Mao’s care since the beginning of their journey has been a comfort and a guiding light during their most difficult times.

“I can’t say enough about Chad and what he means to our family,” Shekeenah said. “He’s excellent not just as a doctor, but as someone who cares about Jonah and our family as individuals. We’re not just a number to them. They truly have their patients’ best interests at heart, which helps us to trust them even more.”

Shekeenah and Ray also appreciate how the teams at Children’s Healthcare of Atlanta Cardiology and Children’s Heart Center cared for their older son, Samuel, who was just 3 when Jonah was diagnosed. Since Jonah was hospitalized for such an extended period, Samuel couldn’t spend very much time with his little brother. They were able to get Samuel special privileges to visit, and the nursing team took particular care to involve him in Jonah’s care.

“He’s really the one who this happened to because his family was torn apart in an instant, and he didn’t understand why,” Shekeenah said. “It gave us a new understanding of the story in the Bible of leaving the 99 for the one. Sibley helped us know that Samuel was going to be okay and taken care of even as we had to give 100 percent of our attention to Jonah.”

The boys are now just regular siblings, fighting over toys one minute and hugging each other the next. Jonah is doing amazingly well and attending kindergarten at his brother’s school. Shekeenah says if you didn’t know his story, you’d have no idea what this fun-loving, vivacious child has been through in his short life.

“He’s very proud of his ‘zipper’ scar and tells everyone he meets that he’s a heart kid,” Shekeenah said. “He thinks it makes him a superhero. He can’t fully grasp his journey yet – it’s all he’s ever known – he just knows that there is something great he has overcome.”